The performance of an internal storage device is dependent on the performance characteristics of the device as well as the file system being used. In order to isolate the effects of the latter, we first benchmarked the raw drives using HD Tune Pro 5.70. It was then formatted in NTFS and subject to our standard direct-attached benchmark suite.

HD Tune Pro allows us to run a variety of tests to determine transfer rates and IOPS for various artificial workloads. In addition, it also allows us to visualize how the performance varies as the tracking head moves from the outer parts of the platter towards the center (i.e, transfer rates as a function of the block address).

Empty drives are bound to perform very well, but, depending on the location of the data in the drive, we find that access rates can go as low as 117 MBps for sequential workloads (compared to the 112 MBps of the 12TB drive from last year). Write access times are a bit unpredictable due to the multi-segmented cache.

The extra tests help in putting some numbers to sequential accesses targeting different areas of the drive. It also provides some interesting numbers relevant to various random access workloads.

Consumers opting for drives such as the 12TB Seagate BarraCuda Pro typically need high-capacity local storage for holding and editing / processing large-sized multimedia files. Prior to taking a look at the real-life benchmarks, we first check what CrystalDiskMark has to report for the drive. The numbers are in the same ballpark as the 12TB version from last year. 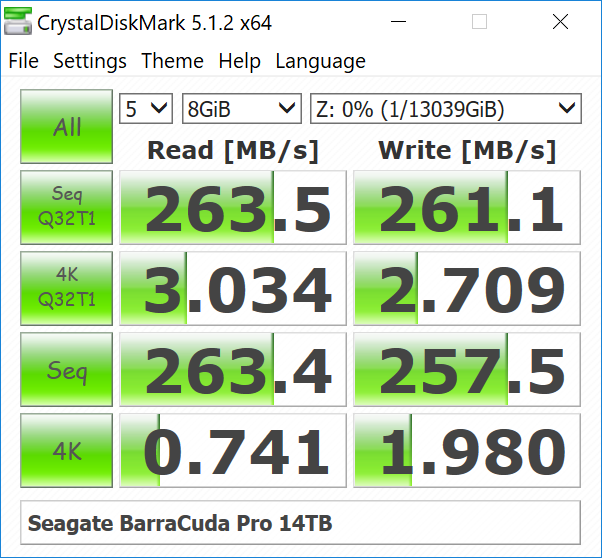 In order to tackle the real-life use-case of transferring large amounts of data back and forth from the drive, we created three test folders with the following characteristics:

These numbers are better than the ones we obtained for the 10TB version from 2016, but, fall a little short of the performance of the 12TB drive from last year.

While processing our DAS suite, we also recorded the instantaneous transfer rates and temperature of the drive. Compared to typical disk drives, the write transfers show higher instantaneous speeds due to a combination of the firmware and the 256 MB cache inside the drive. However, sustained write rates are comparable to other high-capacity drives when the cache is exhausted. The temperature of the unit at the end of the transfers (more than 250GB of traffic) rose by less than 4C, pointing to the power-efficiency of the platform. 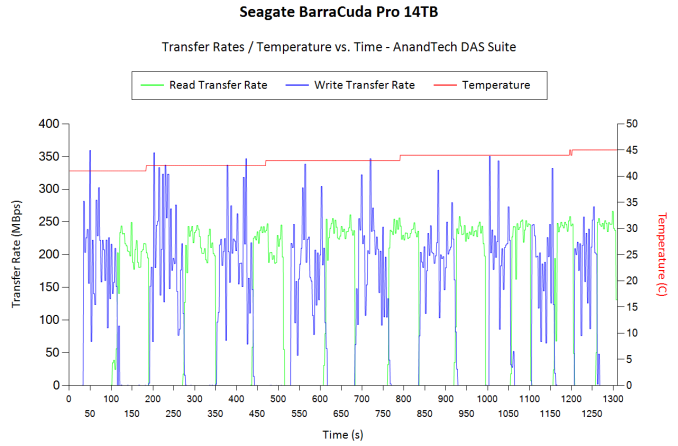 For the use-case involving editing of multimedia files directly off the disk, we take advantage of PCMark 8's storage benchmark. The storage workload is a good example of a user workload, involving games as well as multimedia editing applications. The command line version allows us to cherry-pick storage traces to run on a target drive. We chose the following traces.

Usually, PCMark 8 reports time to complete the trace, but the detailed log report has the read and write bandwidth figures which we present in our performance graphs. Note that the bandwidth number reported in the results don't involve idle time compression. Results might appear low, but that is part of the workload characteristic.

Compared to the results from the 12TB drive last year, we find that the read workloads fare very similarly, but, the write workloads have a slight edge.