Split screen multitasking isn't something new in the tablet space. Microsoft was really the first of the major players to implement it all the way back with Windows 8, although the optimal tablet implementation was mostly restricted to Modern UI apps, with traditional Windows applications having supported a different form of multitasking since long before the advent of the modern tablet simply due to how desktop operating systems with windowing work. More recently, Apple introduced split screen multitasking in iOS 9 on the iPad Air 2, along with two other forms of multitasking for older devices in the form of slide over apps and picture in picture views. These features made their way to the iPad Mini 4 and iPad Pro as well, with the latter offering an experience that essentially gave you two full sized tablet applications side by side. Up until this point Android users were left in the cold, with no way to multitask and existing applications that really just worked like big phone apps.

Android N comes with an optimal but not novel split screen implementation; which Google refers to as Multi-Window mode. It's actually pretty much the same way as iOS handles it, although there are some obvious changes that go along with the differences between iOS and Android. Triggering the multitasking mode is slightly different based on where you are in the UI. The initial case is when you’re just on the home screen. In this case, you need to open the multitasking switcher and hold the existing application for a moment until two shaded areas appear on the left and right sides of the screen. You can then drag the window to one of these sides, which then scales it to fill half of the screen, and puts the multitasking switcher on the other half so that you can select another app to fill that section.

By default, you get a 50/50 split, but you can adjust it to a split where either the left or right application takes up roughly 2/3 of the display, with the other app occupying the remainder. This is similar to how iOS allows for a 50/50 split or an application pinned on the right side, but it gives you more flexibility by allowing you to pin a smaller app on the left side. I actually appreciate this, as there are circumstances where I really want my primary app on the right side on an iPad, which isn’t an option due to there only being two multitasking views.

Some people may wonder why Google didn’t just allow for any arbitrary split. I think there are two reasons for this. The first is that the majority of the time the user will simply want a 50/50 split or to just pin a chat app on the side while working mostly inside another app which occupies most of the display. The existing options cover those cases completely. The second issue is that developers have to be able to tell the operating system a minimum width that they require to lay out their app properly. Because this width would be different from application to application depending on what sort of app it is, there’s no way to enforce consistency with what split is allowed, and users would get confused by why they aren’t allowed to split the screen the same way as with different apps, or why the split ratio had to suddenly adjust itself when they changed what secondary application was open.

The second issue that I outlined above is actually something that I’ve already seen before. I encountered it constantly on the Galaxy Tab S2 which uses Samsung’s multitasking and allows you to set absolutely absurd ratios where the smaller application couldn’t possibly present any useful information. Ultimately, you have to strike a balance between flexibility and consistency, and with Google and Apple having converged upon a similar solution despite the enormous differences between how they handle application layouts, I think it’s clear that offering a few possible layouts can cover almost all cases that a user needs, and the flexibility of allowing an arbitrary split isn’t worth the additional developer effort and inevitable bugs just to satisfy the few cases where the user wants to adjust the ratio a bit more.

If you’re already in an application Google has added a quick but not incredibly obvious way of opening the multitasking drawer in a split view. If you simply tap the button to open it, you’ll be greeted by the standard app switcher and you’ll need to go through the process of dragging one app to the right and one to the left. This actually ends up being more time consuming than the iOS implementation, and Google clearly had that in mind when they added the second method which involves holding down the multitasking button while you’re inside another app. This automatically pushes the open application to the left and brings up the switcher so you can select an app to go on the right. It’s actually the fastest way of accessing multitasking that I’ve seen on a tablet, and I’m quite impressed with how Google has clearly aimed to make multitasking quickly accessible. Holding the button while using two apps quickly dismisses the app on the right side and the left app will return to filling the entire display.

Of course, the big question is how well the multitasking actually works in practice. Obviously this is a developer beta, and I’m not going to fault Google or any other third party developers for bugs. In fact, it has actually worked much better than I expected. As of right now it looks like pretty much any application will work with multitasking, with the exception of some exclusive full screen apps like games. Based on Google’s developer documentation it appears that apps built with a version of the SDK lower than Android N will be forcibly put into multitasking mode, with a popup telling the user that the app may behave unexpectedly. Once developers start targeting Android N they can specify whether their app can work with split screen mode or not. 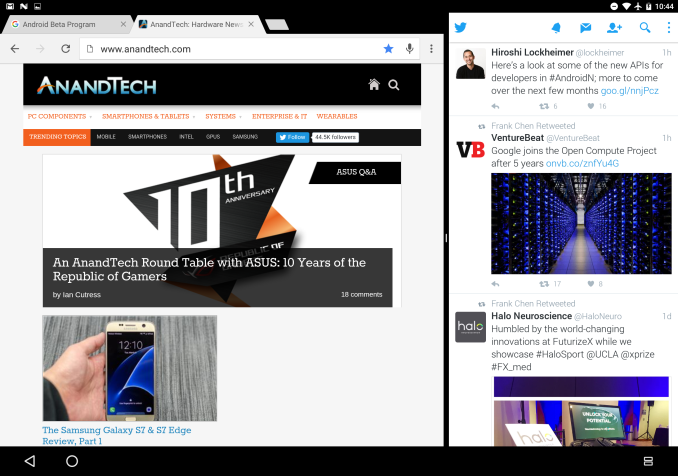 Naturally, every app I’ve tried except for some of Google’s own has told me that the app doesn’t support multitasking. Despite that, they’ve all worked quite well. Twitter, Chrome, and Hangouts all work very well. Skype has been uncooperative when you put it as the smaller window, but for a feature that just came into existence today it’s impressive how well things are working. The fact that these applications already scale to different displays gives Android a big advantage over iOS, as there’s no need to redo your entire app layout to enable split screen mode, and many existing apps already work fairly well with no changes at all.

My only concern with split screen mode is that it takes away a lot of the incentive for developers to make proper tablet UIs, which is already something that Google and other Android developers don’t bother to do. It’s appealing from an effort perspective to rationalize not doing it because users will just use apps in a split screen layout where the app has to look like it does on a phone anyway. There are many apps which are well suited to a full screen view, and I hope that we’ll still see a change in the attitude toward tablet apps on Android even in light of the split screen mode in Android N. It already looks like a fantastic implementation of multitasking, and I’m excited to see how it improves as Google irons out the bugs and developers build apps with support for it in mind.