Now that we have a basic understanding of the proper specifications of the GTX 970 we can dig deeper into its architecture and layout. As we mentioned previously, the GTX 970 ships with an unusual configuration, one we’ve never quite seen before. In it, thanks to a new feature of the Maxwell architecture, NVIDIA has been able to disable part of a ROP/Memory Controller partition, something that they could not do on Kepler or earlier generation designs. As a result of this the intended behavior of the GTX 970 is different than the GTX 980 or any theoretical Maxwell part with a completely disabled ROP/MC partition.

The biggest impact of this configuration is that it creates the segmented memory conditions NVIDIA outlined in their earlier statement. Due to performance issues from the unbalanced ROP/MC partition, NVIDIA segments the memory into a high-performance 3.5GB segment – what they refer to as segment 0 – and a low-performance 512MB (0.5GB) segment containing the rest of the RAM. It is this segmentation that results in some of the previously-unusual memory allocation behaviors and memory bandwidth benchmarks on the GTX 970.

But in order to understand just why the segments exist, how they are allocated, and how they influence performance, we first need to learn about the Maxwell memory crossbar. 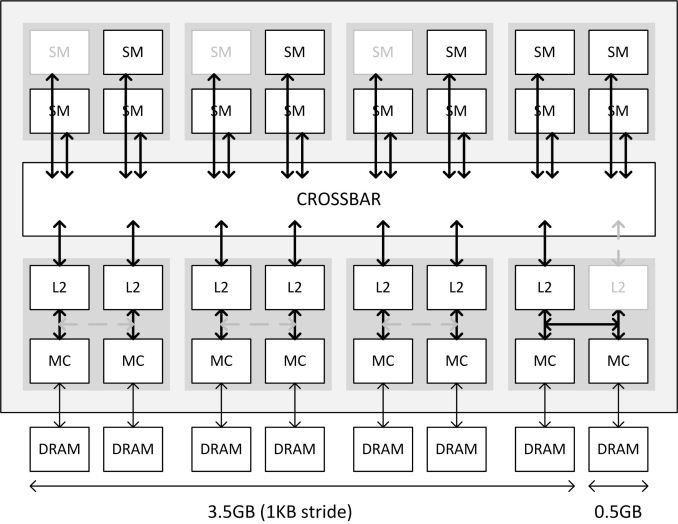 In the above diagram from NVIDIA, NVIDIA illustrates at a high-level overview how the Maxwell memory crossbar is laid out, and specifically how it’s configured for GTX 970. In it we have the 16 GM204 SMMs at the top connected to the crossbar, meanwhile below we have 4 ROP/MC partitions, with each partition divided up into individual ROP/L2 units and memory controllers. Note that the specific units disabled on any GTX 970 chip will vary – it’s not necessarily the 1/3/5 SMMs or the last ROP/MC partition – but from a high level overview this is consistent for GTX 970 regardless of which specific physical units have been disabled.

Meanwhile there’s one other new feature here that’s activated only on the partially disabled partition, and that’s the link between the first and second units of the ROP partition. Typically each ROP/L2 unit would have a link to a port on the crossbar and a link to its own dedicated 32-bit memory controller channel; however because GTX 970 disabled a ROP/L2 unit, the “buddy” link comes in to play. This link is essentially the lynchpin of Maxwell’s new partial disable functionality, and allows the second half of the memory controller to stay active. This link only needs to be active when a ROP/L2 unit is disabled, and NVIDIA has confirmed that it is a full bandwidth link identical to the normal ROP/L2 to MC link, meaning it’s capable of 4 32 byte requests per clock (2 reads and 2 writes). Ultimately this link is what makes a partially disabled partition possible, and is also what makes it possible to have the full 256-bit memory bus present and active in spite of the lack of a ROP/L2 unit and its associated crossbar port.

Finally, because of this configuration and the lack of a ROP/L2 unit we get to the memory segments.  Although the full 256-bit memory bus is present and active on GTX 970 and capable of providing 224GB/sec of combined memory bandwidth between the DRAM modules and the memory controllers, it’s a bit of a misnomer to say the card has that much bandwidth between the memory controllers and everything else, at least in the same sense that the GTX 980 does.

Like virtually every other operation on a GPU, memory accesses are done in parallel to improve throughput. On a fully enabled card such as GTX 980 these operations are striped across all of the memory controllers in what NVIDIA calls a 1KB stride. In doing this, each and every 32 bit memory channel needs a direct link to the crossbar through its partner ROP/L2 unit. However in the case of the GTX 970 a wrench is thrown into the works, as there are 7 crossbar ports and 8 memory channels.

Ultimately due to the design of the crossbars and the memory controllers, it is not possible for 1 crossbar port to carry the full load of 2 memory channels in all circumstances. The crossbar port and its attached ROP/L2 unit can access both memory channels at once, splitting up the 4 operations among them, but there is only 1 read return bus and 1 write data bas, and hence in practice it cannot issue identical operations to both memory channels at once . As a result NVIDIA has segmented the GTX 970’s memory into the now-familiar 3.5GB and 512MB segments. In the case of the 3.5GB segment, this behaves otherwise identically to a fully enabled card such as the GTX 980, with the 1KB stride being striped over 7 crossbar ports, and hence 7 DRAM modules. Meanwhile the 8th and final DRAM module sits in its own 512MB segment, and must be addressed by the crossbar on its own. 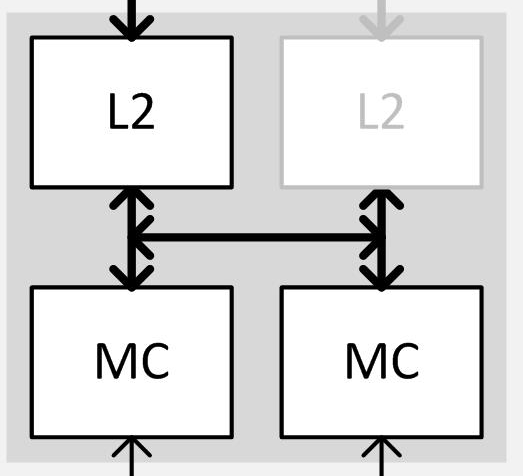 This in turn is why the 224GB/sec memory bandwidth number for the GTX 970 is technically correct and yet still not entirely useful as we move past the memory controllers, as it is not possible to actually get that much bandwidth at once when doing a pure read or a pure write. In the case of pure reads for example, GTX 970 can read the 3.5GB segment at 196GB/sec (7GHz * 7 ports * 32-bits), or it can read the 512MB segment at 28GB/sec, but it cannot read from both at once; it is a true XOR situation. The same is also true for writes, as only one segment can be written to at a time.

Despite all of this, achieving peak memory bandwidth performance on the GTX 970 is still possible, but it requires much more effort since simple striping will not do the trick. The easiest and most effective solution in this regard is to interleave reads and writes over the segments, such that one segment is writing while another segment is reading. Interleaving in this fashion allows both segments to work at once – avoiding the blocking effect of the shared read and write buses – and makes it more likely that both segments are doing useful work rather than waiting for their turn on an operation. However because this is only applicable to situations where more than 3.5GB of VRAM is in use and both segments are necessary, this means it's only theoretically possible to achieve 224GB/sec when more than 3.5GB of VRAM is in use. In any situations below 3.5GB we are de-facto limited to just the larger segment, in which case there are only 7 memory channels (196GB/sec) to stripe memory operations across. NVIDIA could of course interleave operations sooner than that and use both segments more often, but due to the blocking effect we've discussed before the performance hit from using the 512MB segment can quickly become greater than any gains.

The end result of all of this is that the GTX 970 has a unique memory layout that needs to be accounted for by the operating system and NVIDIA’s drivers, as the use of multiple segments adds a new level of complexity to optimizing memory performance. Unequal in size and performance, among the two segments the 3.5GB segment is a larger, faster, and otherwise more preferable segment to the 512MB segment. Which means from a logical hierarchical perspective, the 512MB segment essentially serves as an additional layer of memory between the main VRAM and system memory, being slower than the 3.5GB segment but offering almost 2x the performance of going out over the PCIe bus to system memory.

The upshot here is that while this is the first time NVIDIA has used this specific ROP/MC configuration in a product, this is not the first product they have designed with segmented or otherwise unbalanced memory configurations. Since the GTX 500 series, on some midrange SKUs NVIDIA has used unbalanced/asymmetrical memory configurations, most recently on the GTX 660 and GTX 660 Ti. In the case of both of those cards, NVIDIA utilized a 192-bit memory bus with 2GB of VRAM attached, which meant that some memory controllers had more VRAM attached to them than others. The end result as it turns out is very similar, and while NVIDIA has never explained in-depth how they handle memory allocation on those cards, it turns out that it’s very similar to GTX 970’s memory segmentation. Which is to say that NVIDIA actually has multiple generations of experience with segmented memory, and this is not the first time they have implemented it. Rather this is first time we’ve seen such a configuration on a high-performance card such as the GTX 970. 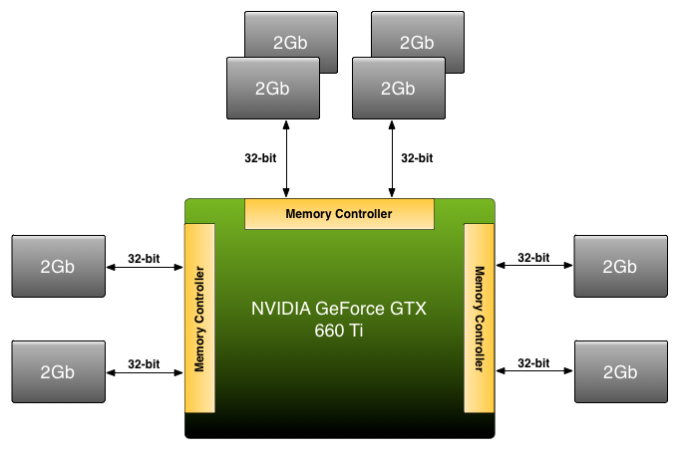 As for why NVIDIA is using such a configuration here, the crux of the matter is money and yields. Without the ability to partially disable a ROP/MC partition, NVIDIA would either have to spec a card to use a fully enabled partition – essentially reducing yields for that card and driving up costs – or disable the entire partition and lose all of the benefits of the additional ROPs, memory, and the memory controller. This finer granularity allows NVIDIA to better control how they harvest bad chips and what resulting configurations they bring to market, along with making a single ROP/L2 defect less harmful to overall performance by keeping the rest of a partition online. Otherwise, to stick with a “balanced” configuration with as many crossbar ports as DRAM modules would result in either a higher spec GTX 970, or a lower spec card with a 192-bit memory bus.

In the grand scheme of things then, depending on how you want to define memory capacity the GTX 970 can be said to have either 3.5GB of VRAM or 4GB of VRAM. Only the first 3.5GB segment is a high-speed (full bandwidth) segment, and for naïve operations this is the segment that software will want to use. However the final 512MB segment is accessible, and despite its lower performance it is still usable and still far better than going to system memory, in which case GTX 970 has and can access a full 4GB of VRAM. This means that both answers can be correct, and like so many other facets of modern technology, the true answer is often more complex than a single number.