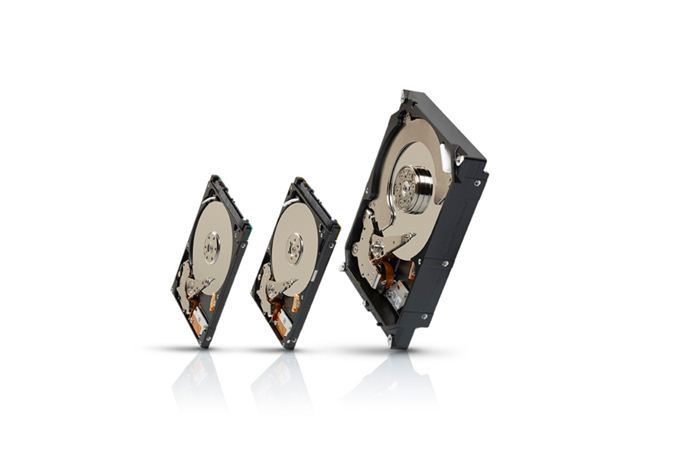 A few days ago we reported that Seagate would stop selling 7200 RPM 2.5” hard drives by the end of the year. Now we know why. Seagate will continue to offer 5400 RPM 2.5” drives, but if you want more performance without diving into the performance/capacity tradeoffs of an SSD Seagate will offer you its 3rd generation solid state hybrid drive (SSHD).

While both families will have many members, at launch we’ll see the following:

All of the drives use a standard SATA interface, and all of them feature 8GB of MLC NAND (with a small portion of the NAND set aside for use in SLC mode, similar to SanDisk’s nCache). This is a disappointingly small amount of NAND, however Seagate hinted at future, higher performance versions shipping with somewhere around 32GB of NAND. As we found in our investigation of Apple’s Fusion Drive, the ideal number is likely somewhere in the 128GB - 256GB range but that puts you in a very different price class.

The benefit of using only 8GB of NAND is that Seagate is able to keep prices very low. Both Laptop and Desktop SSHDs are expected to carry around a $15 - $20 price premium over competing 7200RPM alternatives.

The NAND mostly acts as a read cache, although this time around Seagate claims it will be able to cache some writes. Seagate is understandably sensitive to writing tons of data to the NAND since it’s only an 8GB MLC device, but endurance shouldn’t be too much of a problem to navigate around with good firmware. There’s no data separation, everything that is written to NAND also exists on the hard drive - although it’s not clear if that write happens in tandem or sequentially.

Seagate is particularly proud of their very low time to use performance with the new SSHDs. Apparently Seagate aggressively tuned its algorithms to cache roughly all accesses that happen within the first minute of power on.

Although I’m not very excited about the performance of these drives compared to SSDs, their low price should make Seagate’s SSHDs an obvious choice compared to a traditional hard drive. The fact that we’ll get both 2.5” and 3.5” SSHDs is nice since many SSD users on the desktop are still consumers of mechanical drives as well. Personally I’m not sure how much I’d benefit from using Seagate’s Desktop SSHDs in my RAID array since I mostly do large block sequential transfers (which would be uncached) to/from the array. For gamers or folks who have an SSD that’s smaller than their total application footprint these SSHDs might be compelling.

When I first reviewed the Momentus XT I concluded “There's no reason for any performance oriented mechanical drive to ship without at least some small amount of NAND on board.” Three years later, it looks like that vision has finally come to be.