The Vizio is clean and sleek, really a notebook that looks like it was designed by actual industrial designers. This should be a pretty foregone conclusion, but there’s a large number of notebooks out there that don’t look like designers had any say in the designs, especially at the lower end. 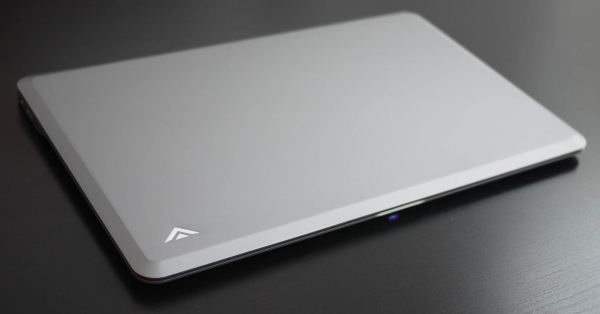 The aesthetic is crisp and the entire notebook is very unadorned. There’s nothing glossy on this notebook—not the display, bezel, nor any of the aluminum or the soft touch plastic pieces that make up the chassis. It’s fantastic and I love it.

The body is a single piece of anodized aluminum with a gunmetal finish and the bottom half of the casing is soft-touch plastic. The lid is almost entirely clean, with a small Vizio logo in the top left corner. In profile, the notebook is mostly flat, with tapers at the front and side edges to enhance the perception of thinness. It’s a neat design trick, but I feel like it’s starting to be overused in the world of thin (and not so thin) notebooks. The sides have small portions that are flat, in order to house the meager assortment of ports. The flat part continues across the back of the notebook where the hinge is. 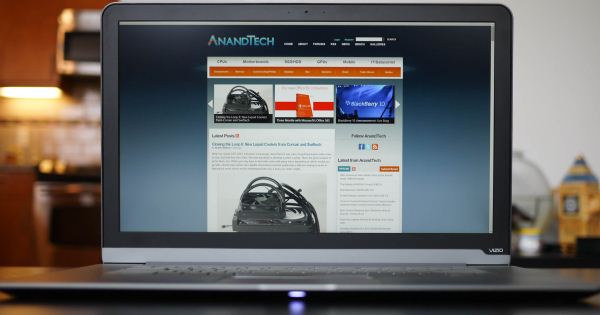 The bezel around the display is perfect—dark plastic with a matte finish, relatively thin, webcam and mics centered above the display, thin aluminum band at the bottom, and a very small Vizio logo at the bottom left corner. Whoever designed it could teach a course on notebook interior design that a lot of other notebook manufacturers could really benefit from.

I’m a fan of where Vizio has gone with their industrial design language, though there’s some refinement that remains on the build quality side of things—the anodization is noticeably coarser than what you find on recent Apple or ASUS devices, while the edges are sharper and more abrupt than they should be. I’ve seen variable build quality between units, with greater degrees of variance in the panel gaps and fit of the keyboard and touchpad. They’re glitches for sure, all signs that point to Vizio being very new to the PC hardware game still, but these are all relatively minor details that they should pick up on and fix as they move forward

Being only 0.68” thick and weighing less than 4 pounds, the CT15 is still slightly bulkier than the smaller and more svelte S9 15” (0.58”, 3.63lbs). Something about the ultrathin 15” form factor, like the Vizio and Samsung, as well as things like the Retina MacBook Pro 15” and the ASUS Zenbook U500, is very aesthetically appealing even though they lack the out-and-out portability of machines with smaller footprints. Even with the superlight weights in play here, the increased size makes this class of system more difficult to use in cramped spaces (such as a plane or lecture hall desk). But damn if they don’t look fantastic.

There’s one huge flaw in this entire design that I’ve been rhapsodizing about though. Surprisingly, it’s not the touchpad—the Sentelic pad that plagued the first run of Windows 7-based Vizio systems has been chucked in favor of a Synaptics unit that’s an absolute breath of fresh air in comparison. Nobody was lying to you, the Sentelic pad actually made the CT15 downright unusable, especially in comparison with the increasingly stellar Elan and Synaptics pads. Sure, they aren’t Apple, but they’re close. The Sentelic was closer to the dark ages for PC touchpads and the series of misguided buttonless pads used by HP and Dell. (Interestingly, my last experience with Sentelic was with the Dell Inspiron 11z from the CULV days. It had a similarly awful touchpad.) But that’s history, and thankfully we have Synaptics and their multitouch gesture suite. 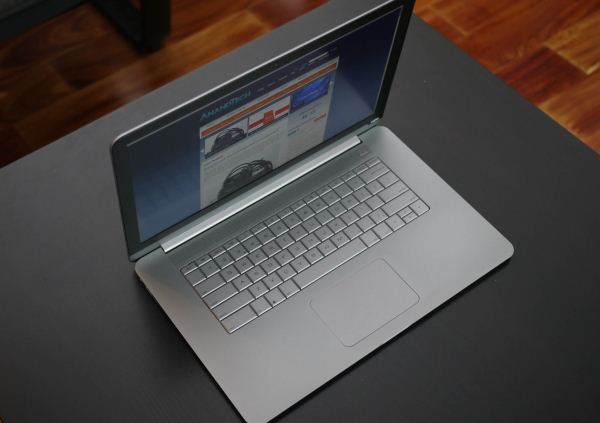 No, the real issue here is the keyboard as well as the metal surrounding it. The keyboard was a problem spot before, too, and hasn’t been fixed. It’s one of the few notebooks that I’ve seen in the last four or five years without a chiclet style keyboard. Even the ThinkPad line, that bastion of old-school notebook design, has moved into the modern world, so it was a bit odd to see the older style of keyboard on this. But I have no quarrel with the keyboard style; the flatness seemed to go well with the rest of the industrial design. Unfortunately, there’s way too much flex involved, and not just in the keyboard itself. The interior aluminum flexes heavily as well, which is odd and indicates a very thin chassis material used. The display also exhibits a bit more flex than I would like, though it’s not a day to day issue like the keyboard and interior is. It’s pretty bad, and a major oversight for a company that seemed to be so detail oriented with the rest of the design.

The upcoming Thin+Light looks basically the same as the current one, but goes a long way towards fixing the interior flex. They made the interior aluminum panel a bit thicker, paired with a stiffer keyboard, and made all the build quality related issues go away. The typing experience is significantly better, though I still think they should move to a chiclet keyboard. You do get used to the flex in the current-gen CT15; it’s not a dealbreaker like the touchpad was previously, but it definitely does detract somewhat from the user experience.