Buying an SSD for your notebook or desktop is nice. You get more consistent performance. Applications launch extremely fast. And if you choose the right SSD, you really curb the painful slowdown of your PC over time. I’ve argued that an SSD is the single best upgrade you can do for your computer, and I still believe that to be the case. However, at the end of the day, it’s a luxury item. It’s like saying that buying a Ferrari will help you accelerate quicker. That may be true, but it’s not necessary.

In the enterprise world however, SSDs are even more important. Our own Johan de Gelas had his first experience with an SSD in one of his enterprise workloads a year ago. This OLTP test looks at the performance difference between using 15K RPM SAS drives for a database server. Johan experimented with using SAS HDDs vs. SSDs for both data and log drives in the server. 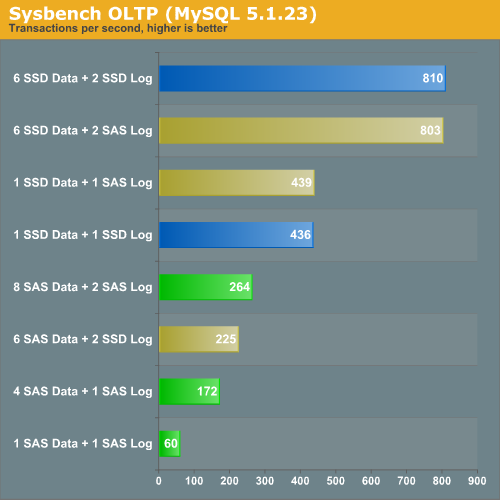 Using a single SSD (Intel’s X25-E) for a data drive and a single SSD for a log drive is faster than running eight 15,000RPM SAS drives in RAID 10 plus another two in in RAID 0 as a logging drive.

Not only is performance higher, but total power consumption is much lower. Under full load eight SAS drives use 153W, compared to 2 - 4W for a single Intel X25-E. There are also reliability benefits. While mechanical storage requires redundancy in case of a failed disk, SSDs don’t. As long as you’ve properly matched your controller, NAND and ultimately your capacity to your workload, an SSD should fail predictably.

The overwhelming number of poorly designed SSDs on the market today is one reason most enterprise customers are unwilling to consider SSDs. The high margins available in the enterprise market is the main reason SSD makers are so eager to conquer it.

Just six months ago we were first introduced to Crucial’s RealSSD C300. Not only was it the first SSD we tested with a native 6Gbps SATA interface, but it was also one of the first to truly outperform Intel across the board. A few missteps later and we found the C300 to be a good contender, but our second choice behind SandForce based drives like the Corsair Force or OCZ Vertex 2.

Earlier this week Micron, Crucial’s parent company, called me up to talk about a new SSD. This drive would only ship under the Micron name as it’s aimed squarely at the enterprise market. It’s the Micron RealSSD P300.

The biggest difference between the P300 and the C300 is that the former uses SLC (Single Level Cell) NAND Flash instead of MLC NAND. As you may remember from my earlier SSD articles, SLC and MLC NAND are nearly identical - they just store different amounts of data per NAND cell (1 vs. 2).

The benefits of SLC are higher performance and a longer lifespan. The downside is cost. SLC NAND is at least 2x the price of MLC NAND. You take up the same die area as MLC but you get half the storage. It’s also produced in lower quantities so you get at least twice the cost.

Micron wouldn’t share pricing but it expects drives to be priced under $10/GB. That’s actually cheaper than Intel’s X25-E, despite being 2 - 3x more than what we pay for consumer MLC drives. Even if we’re talking $9/GB that’s a bargain for enterprise customers if you can replace a whole stack of 15K RPM HDDs with just one or two of these.

The controller in the P300 is nearly identical to what was in the C300. The main differences are two fold. First, the P300’s controller supports ECC/CRC from the controller down into the NAND. Micron was unable to go into any more specifics on what was protected via ECC vs. CRC. Secondly, in order to deal with the faster write speed of SLC NAND, the P300’s internal buffers and pathways operate at a quicker rate. Think of the P300’s controller as a slightly evolved version of what we have in the C300, with ECC/CRC and SLC NAND support.

The rest of the controller specs are identical. We still have the massive 256MB external DRAM and unchanged cache size on-die. The Marvell controller still supports 6Gbps SATA although the P300 doesn’t have SAS support.

The P300 will be available in three capacities: 50GB, 100GB and 200GB. The drives ship with 64GB, 128GB and 256GB of SLC NAND on them by default. Roughly 27% of the drive capacity is designated as spare area for wear leveling and bad block replacement. This is in line with other enterprise drives like the original 50/100/200GB SandForce drives and the Intel X25-E. Micron’s P300 datasheet seems to imply that the drive will dynamically use unpartitioned LBAs as spare area. In other words, if you need more capacity or have a heavier workload you can change the ratio of user area to spare area accordingly.

Micron shared some P300 performance data with me:

The data looks good, but I’m working on our Enterprise SSD test suite right now so I’ll hold off any judgment until we get a drive to test. Micron is sampling drives today and expects to begin mass production in October.