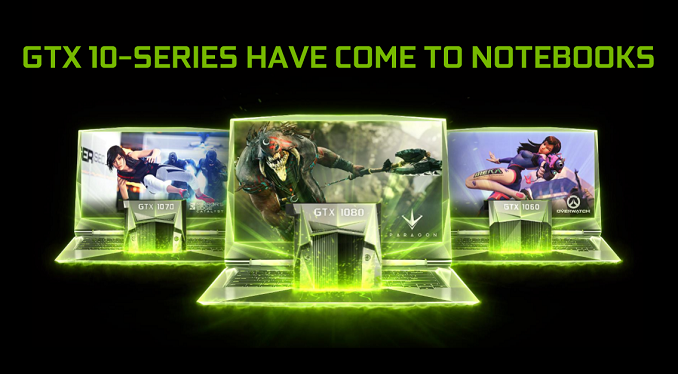 Although no two GPU launches are ever exactly alike, I think this year’s launch of the FinFET generation GPUs really drives that point home. Over the last 3 months we have seen an incredibly compact launch schedule from NVIDIA, having started with the GeForce GTX 1080 and GP104 in May, and adding another 3 cards and 2 GPUs since then. At least on the desktop side, this is the most aggressive launch schedule we’ve seen out of NVIDIA in nearly a decade.

On the mobile side however, things have moved at a different pace. In the most recent years, NVIDIA has launched at least parts of their mobile stack either directly alongside their desktop series launch (e.g. GTX 600M series), or shortly thereafter in the case of the GTX 900M series. So there has been a great deal of interest in when the mobile GTX 10-Series would launch, both due to overall booming gaming laptop market, and because laptops in general are the ultimate litmus test for power efficiency and as a result stand to gain the most from the move to FinFET transistors.

To that end, we finally have an answer to the mobile question. Skipping any pre-release fanfare like on the desktop side, NVIDIA and its partners are going straight to launch, hard launching the GeForce GTX 10-Series lineup for notebooks today. And while it’s been a bit longer of a wait than in past years, NVIDIA is launching a full 3-part stack at once, from GTX 1060 to GTX 1080, meaning the notebook video card is now fully caught-up with desktop lineup. There’s a lot to cover here, so let’s dive right in.

In the interest of expediency I’ll forgo a deep recap of the Pascal architecture, but if you’re just now hearing about Pascal for the first time, please see our desktop architectural deep dive. Otherwise, in a nutshell, Pascal is everything that was great about Maxwell 2, but bigger, better, and manufactured on TSMC’s 16nm FinFET process. The first manufacturing jump since the launch of 28nm in 2012, 16nm FinFET delivers a significant improvement in both power consumption and transistor density, both of which are critical improvements for the space and power limited laptop market. A good deal of Pascal’s performance improvements are either a direct result of or are a second-order effect of 16nm FinFET, as NVIDIA has been able to significantly crank up the GPU clockspeeds compared to Maxwell, and these higher clockspeeds are coming to their notebook GPUs as well.

Architecturally, Pascal is not a radical departure from Maxwell 2. The basic GPU, GPC, and SM organizational structures are unchanged. However NVIDIA has implemented newer generation color compression for even greater bandwidth savings, and GDDR5X support within their memory controllers for greater total memory bandwidth. Meanwhile Pascal also introduces some important changes to how work scheduling is handled, with the architecture getting a much more flexible system for workload concurrency and pre-emption, which gives developers more practical, performant options when utilizing DirectX 12’s and Vulkan’s asynchronous compute support.

Finally, the architecture also incorporates significant updates to the display controller and video blocks that brings them up to date with the latest standards. Pascal now supports DisplayPort 1.3 & 1.4, adding support for both higher signaling rates and HDR static metadata. HDMI on the other hand is relatively unchanged from Maxwell 2 – it’s still HDMI 2.0b – however HDR static metadata for HDMI is a recent introduction here. Meanwhile the video encode and decode blocks now offer full support for HEVC, decoding Main(8), Main10, and Main12 profiles in fixed function hardware, while HEVC video can now be encoded at Main and Main10 profiles.

The end result, as we’ve seen in NVIDIA’s desktop parts so far, is a significant increase in performance and performance-per-watt relative to the Maxwell 2 generation. And now all of this is coming to laptops as well.

Having touched upon what we’ve seen so far with Pascal on the desktop, let’s talk about Pascal in the mobile space. NVIDIA’s previously launched GP104 and GP106 GPUs is at the hearts of the new mobile products, with GP104 used in the GTX 1080 and GTX 1070, while GP106 is used in the GTX 1060. Architecturally there’s nothing else in Pascal we haven’t already seen on the desktop – so there are no hidden laptop-only features – but this doesn’t mean that there aren’t some important changes in store for the laptop iteration of NVIDIA’s GeForce lineup.

Of particular note here, alongside today’s launch, NVIDIA is rolling out a new version of Battery Boost. The technology, first introduced alongside the GTX 800M series, combines a frame rate cap with an aggressive clockspeed governor in order to minimize the amount of energy spent to sustain a given framerate, thereby increasing battery life. The newest rendition of Battery Boost is a refinement of the technology, and NVIDIA notes that they have specifically focused on further stabilizing framerates (i.e. reducing variance) in order to deliver a smoother experience. 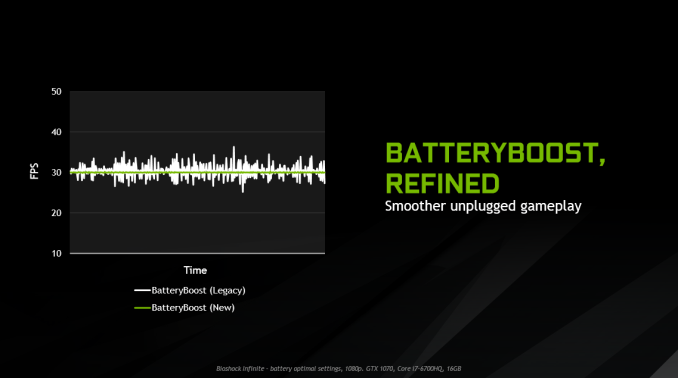 NVIDIA is also tying quality settings into Battery Boost, allowing the technology to dial down game settings to further save power. The technology was already an extension of GeForce Experience, so this sounds like a relatively straightforward adjustment, however I haven’t yet had a chance to play with it myself to see what exactly NVIDIA is doing with quality settings and how it differs from the previous iteration of the tech. There’s also a piece of good news in here for current GeForce laptop owners: as this is a reworking of the tech at the driver level, the new version of Battery Boost is coming to Maxwell laptops as well as the new Pascal laptops.

As for the mobile parts themselves, what will be immediate obvious is that NVIDIA has overhauled product naming and branding. Starting with the Pascal generation, NVIDIA has done away with separate Mobile designations like GTX 980M. Instead there is only the GeForce GTX series, and whether a part is destined for laptops or desktops, it is still called the GTX 1080/1070/1060.

This overhaul is essentially the conclusion to a process NVIDIA started last year with the release of the GeForce GTX 980 for Notebooks, which saw NVIDIA release a fully-enabled (but still mobile-optimized) GTX 980 product for use in notebooks. Starting with the Pascal generation then, NVIDIA is extending this branding and product design strategy to all mobile parts, meaning that dedicated mobile branding and naming is no more.

The impetus behind this is to simplify product naming and to make platform performance more consistent. NVIDIA wants a GTX 1080 to perform like a GTX 1080, regardless of whether it’s in a laptop or a desktop. This means that given sufficient cooling (more on this in a bit), laptop video card performance should be within 10% or so of a desktop part. By doing so, this does away with the tradition of mobile parts underperforming their desktop counterparts (e.g. GTX 980M was closer to desktop GTX 970 in performance), which ideally will make it clearer to consumers what they should expect from a laptop video card, and how that product is impacted by system requirements and the like. And since desktop and mobile parts should perform like-for-like, there is no longer a need to have separate mobile branding.

Which is not to say that the mobile parts are 100% identical to their desktop counterparts, or even configured in exactly the same manner. NVIDIA’s goal, after all, is near performance parity, so how they get there is, in essence, up to NVIDIA. We’ll dive into specs in depth on the next page but case in point will be the GTX 1070; the desktop version has 1920 CUDA cores, but the mobile version has 2048 cores clocked at a slightly lower clockspeed. Presumably, it’s more power efficient for NVIDIA to go wide and slower than pushing the clocks quite so hard. 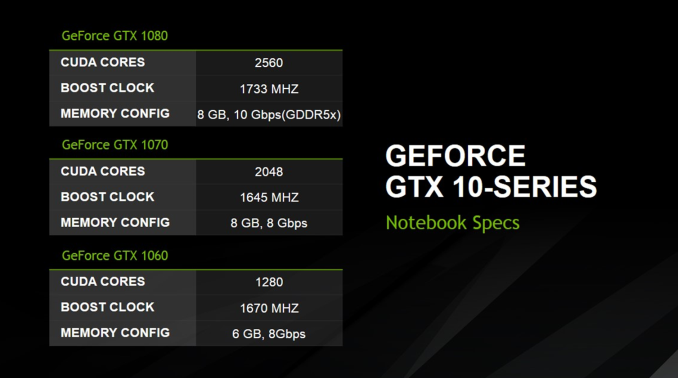 Of course since we are talking about laptops here, inescapable is the subject of power delivery and heat dissipation. As we’ve already seen time and time again in laptops, the amount of performance a given laptop can hit is closely tied to its power delivery and cooling capabilities. Put a power-hungry GPU (or other ASIC) in a laptop that doesn’t have enough cooling capacity to cool the chip when it’s running at full load, and the chip will have to throttle back to the point where power consumption/heat generation reaches equilibrium with the cooling system. Ergo notebooks with large coolers tend to deliver better performance than thin & light laptops, even with the same GPU and CPU.

NVIDIA has not disclosed the official TDPs of the mobile Pascal parts, but all indications are that they are going to be high. To be clear, these notebook parts are binned and power optimized, as has been the case in past generations. The best, lowest voltage GPUs are going to notebooks for exactly this reason, and NVIDIA is able to tweak the power delivery system to match. So while notebook GTX 1080 is probably not a 180W part, it almost certainly has a full load TDP in the 3-digit range. And if TDPs are that high – which is to say higher than the 900M series – then I wouldn’t be surprised if Pascal notebooks have an even wider spread on performance to account for this.

But with that said, NVIDIA has put some thought into all of this. Every GTX 10-Series notebook part has a base clock, and NVIDIA requires OEMs to adhere to this base clock. If a design falls below the base clock (presumably NVIDIA means consistently) then a laptop will not be approved by NVIDIA. This ultimately serves as the first and most important measure keeping vendors from doing crazy things like putting GTX 1080 in a 45W thin & light laptop, for example.

On that note, the GTX 10-Series will also be the first notebook GPUs from NVIDIA where they are allowing factory overclocking. Similar to desktop cards, laptop vendors will be allowed to overclock their devices’ Pascal GPUs to a higher frequency, essentially shipping a higher performance laptop. I don’t have a good feeling for how common this is going to be right now, but I would expect that it’s limited to very high end laptops with above average cooling, and also likely those laptops that use removable cards (as opposed to soldered on GPUs) so that vendors can test and validate laptop cards like they do desktop cards.