The Evolution of HDDs in the Near Future: Speaking with Seagate CTO, Mark Re

Seagate to Expand Usage of SMR

Today, the vast majority of HDDs are based on perpendicular magnetic recording (PMR) technology, which is sufficient for today’s applications in terms of areal density and performance. Several years ago makers of hard drives believed that PMR technology would not support areal densities of over 1 Tbit per square inch (Tb/inch2) because of physical limitations and yields. However, in the last couple of years, a lot of progress has been made and it looks like PMR technology will continue to evolve towards that goal (albeit slowly). 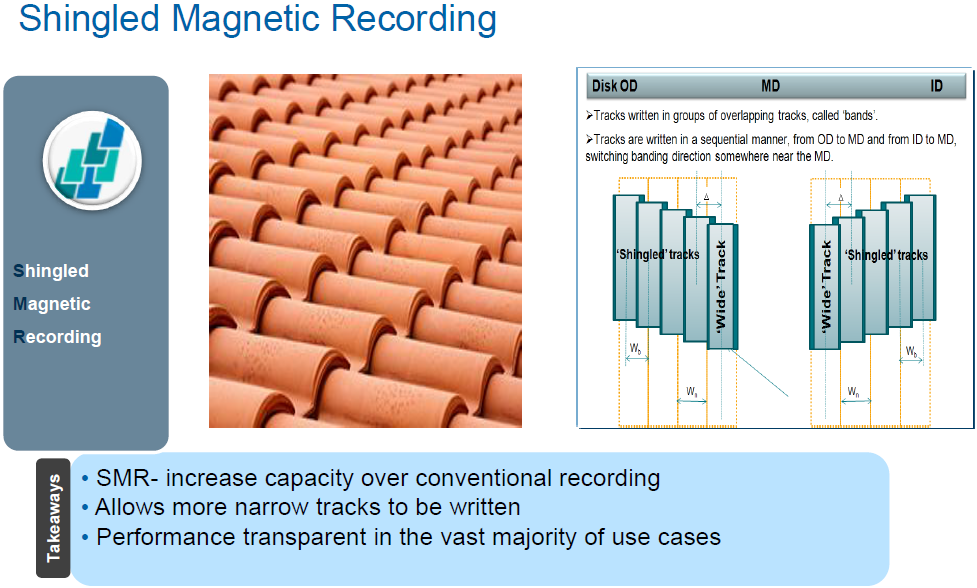 To increase areal densities significantly, Seagate started to use shingled magnetic recording (SMR) technology several years ago. The SMR technology enables areal densities higher than 1 Tb/inch2, but brings a number of challenges. HDDs that use shingled recording write new tracks that overlap part of the previously written magnetic tracks. The overlapping tracks may slow down writing because the architecture requires HDDs to write the new data and then rewrite nearby tracks as well. For this reason, Seagate’s implementation of device-managed SMR groups adjacent tracks into bands, where shingling ends. This optimizes the number of tracks that need to be rewritten after writing operations and thus promises to help provide deterministic and predictable performance of SMR HDDs in typical scenarios. Ultimately, environments that involve a decent amount of writing might not be impressed with SMR performance, but the key figure here is density.

Grouping into bands is not the only way to conceal peculiarities of SMR. In fact, every SMR drive has zones that use PMR recording technology with relatively fast writes. Those zones are used to quickly record data and perform other necessary operations when needed. Eventually, information from PMR zones is automatically moved to SMR zones without any actions from the user or the operating system. One can think about it as some sort of garbage collection that needs to be triggered by the firmware. Seagate does not disclose actual configurations of its SMR bands or capacity of PMR zones, but notes that such configurations depend on types of applications that the HDDs are designed for (i.e., consumer drives and drives for cold storage have different configurations).

To further ensure optimal writing performance, SMR-based HDDs can also integrate DRAM and/or NAND flash buffers. For example, Seagate’s Mobile 2.5”/7mm hard drive with 2 TB capacity has a 128 MB DRAM cache and an unspecified amount of SLC NAND flash memory. The SLC NAND buffer has a rather high writing performance, which means that when small amounts of data are recorded on an SMR-based drive, the latter can boast with a very high write speed. Since the amount of NAND flash is not very high (less than one gigabyte in the case of the mobile 2.5” 2 TB HDD), it does not help a lot with large files, but for a typical home user storage environment it should be helpful.

One of the areas Seagate is proud of is the iterative product design for optimizing writing performance of SMR-based drives since the company first introduced them several years ago. One might argue that the claimed performance numbers for the Seagate Archive 8 TB and Seagate Mobile 2 TB are not that impressive. This hides the implementation of SMR management in the Seagate Mobile 2 TB, which involves three levels of caches/buffers (DRAM, NAND, PMR zones), and demonstrates the complexity of such HDDs. The architecture of SMR-based consumer drives requires controllers with advanced computing features to manage buffers, transfer data from PMR zones to SMR zones and perform other operations to guarantee expected performance in different workloads. We have seen similar problems with TLC NAND-based SSDs, which use pseudo-SLC buffers to ensure fast writes. Depending on Seagate’s plans for the future, the device-managed SMR HDD architecture seems to be expandable for future performance benefits.

Seagate plans to adopt SMR rather widely going forward. In the near future, Seagate will introduce SMR-based HDDs specifically for video surveillance applications (Western Digital's Purple line of HDDs spring to mind as the competition there). Later on, more hard drives featuring “shingled” platters for client PCs can also be expected. We are not sure whether SMR-based HDDs are set to be offered to performance-demanding applications given the evolution of PMR and inevitable emergence of other technologies, but we might see hybrid variants that a partial SMR and partial PMR to keep performance high. Still, Seagate made it clear that SMR is not reserved for cold storage.