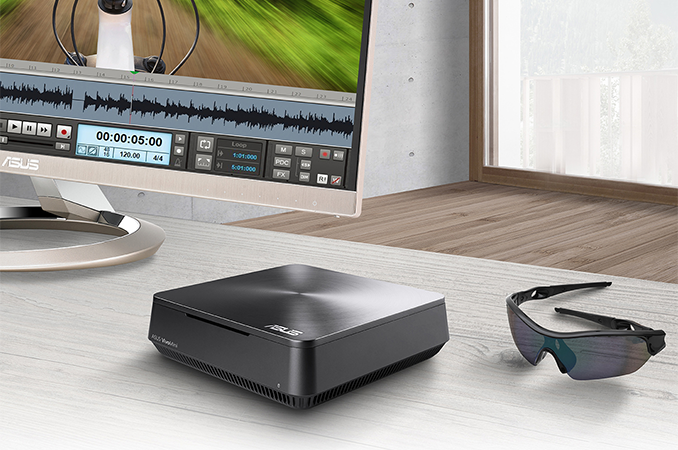 Intel’s NUC and Mini-STX form-factors are designed to build tiny PCs with decent performance with more or less standard components. However, these form-factors have traditionally not supported discrete graphics processors in any form and can integrate only one or two storage device - at present, only some of GIGABYTE's BRIX line and Zotac's mini-PCs are using GPUs in a larger chassis to achieve this, particularly due to the increased heat generation. ASUSTeK’s Vivo desktop personal computers are designed to fit between NUC and mini-ITX in terms of size and the company this week added two new models in to the lineup.

The new ASUS VivoMini VM65 and VM65N PCs are going to be available with either an Intel Core i3 or the Core i5-6200U, featuring the Skylake micro-architecture as well as an unnamed Intel PCH. The systems are equipped with two SO-DIMM slots for up to 16 GB of DDR4-2133 memory, space for one 3.5-inch drive (or two 2.5-inch with optional Vivo DualBay), an 802.11ac Wi-Fi module, Gigabit Ethernet, a 4-in-1 card reader, four USB 3.0 ports, two USB 3.1 type-A ports (the VM65N only), one audio output jack, an HDMI connector, one Dual-mode DisplayPort output (capable of driving DP-to-HDMI and DP-to-DVI over passive adaptors), built-in 2x2W SonicMaster speakers and a Kensington lock.

The more advanced VM65N also comes with the NVIDIA GeForce GTX 930M mobile graphics processor (384 stream processors), with 1GB of onboard DDR3 memory and running under NVIDIA's Optimus technology. ASUS claims that this gives 56% better synthetic benchmark scores over the non-GPU version of the VivoMini. While ASUS does not position the VM65N directly as a gaming machine, it claims it could serve as a photo or video editing platform thanks to its ability to connect to three displays (one using HDMI, two using dual-mode DisplayPort). While it is noteworthy that ASUS has managed to install a discrete GPU into a tiny PC, the question is whether such a graphics chip can bring much of a benefit to a standard user beyond CUDA support.

The other side of the equation is CUDA support of the extra graphics chip, or a potentially better ability to drive certain display types. It has also been pointed out that splitting the power generation across two chips may be better for heat removal and heatsink/fan noise, but also makes it easier to use the same motherboard across all VivoMinis. Though it would be interesting to compare the internal designs. 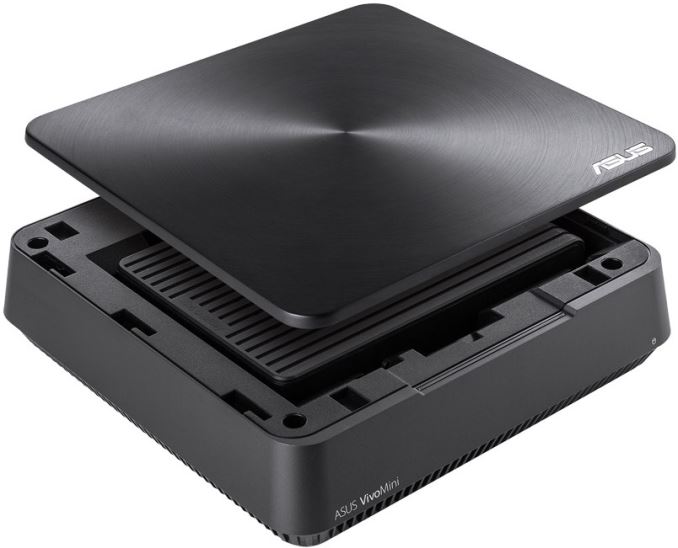 VivoMini PCs from ASUS come in sub 2-liter enclosures made of brushed aluminum. The systems are larger than Intel’s NUCs, but they are still more compact that mini-ITX PCs. They can be attached to the backside of displays using standard VESA mounts (presumably 100x100mm, not confirmed), or placed on the desk.

The exact pricing of the VivoMini VM65 and VM65N is unknown. Right now Amazon sells the previous generation models, the VM62 and VM62N, starting at $458 and $1073 respectively.